The consumers view on wearables, part 2, is a survey conducted by Ericsson Consumer Lab in March 2016. This was an online survey of 5,000 iPhone and Android smartphone users, aged between 15 and 65, of whom 50% were also existing wearable technology owners.

40 percent of the smartphone users surveyed are interested in wearables ideas like “exact measure”; a dress or shirt that is equipped with built-in sensors that take thousands of measurements of your body. An app can then recommend clothing online that exactly matches your shape.

hile interest seems to be high, consumers also believe that smart clothing faces some challenges, with 43 percent concerned that having technology embedded in clothing means that they will not be able to replace the item as easily. As a result, most feel that such clothing might not appeal to the masses and will go mainstream only beyond 2020.

Contrary to expectation, concern over personal data sharing is not a key issue for users of wearables. In fact, users believe in sharing their results and data with friends and family.

Half of users of wearables share the data from their wearables online, and 60 percent feel in control of the data they are sharing and who has access to it. To provide actionable insights and personalized benefits, 67 percent are open to having third parties use their wearables data, as long as the process is anonymous, do not include personal and identifiable data, and they get some value in return.

This openness can be attributed to two factors: a belief that the insights and services provided are of value, particularly if users have an interest in health and fitness; and the fact that users of wearables seem to be more familiar with online risks in comparison to other smartphone users.

However, 53 percent of existing users of wearables, and an equal proportion of non-wearables owners, also acknowledge that it is very likely that wearables will be vulnerable to viruses, hacking and data breaches in the next 5 years.

The current generation of fitness bands and smartwatches are just the beginning of a momentous change. Smartphone users believe that wearable technology will expand in more numerous and impactful ways than smartphones have in the past 10 years.

Consumers surveyed believe wearables could eventually replace existing items such as the traditional wristwatch, medical equipment like blood and glucose monitors or even house or car keys.

4 out of 10 smartwatch users in the survey already spend less time looking at their smartphone screen because notifications are now available on their smartwatches. Today, 25 percent of existing users of wearables already own more than one wearable device, and 1 in 10 already owns 4 wearables.

The future vision and predictions on what gadgets will be replaced by wearables is incredible. See chart below. 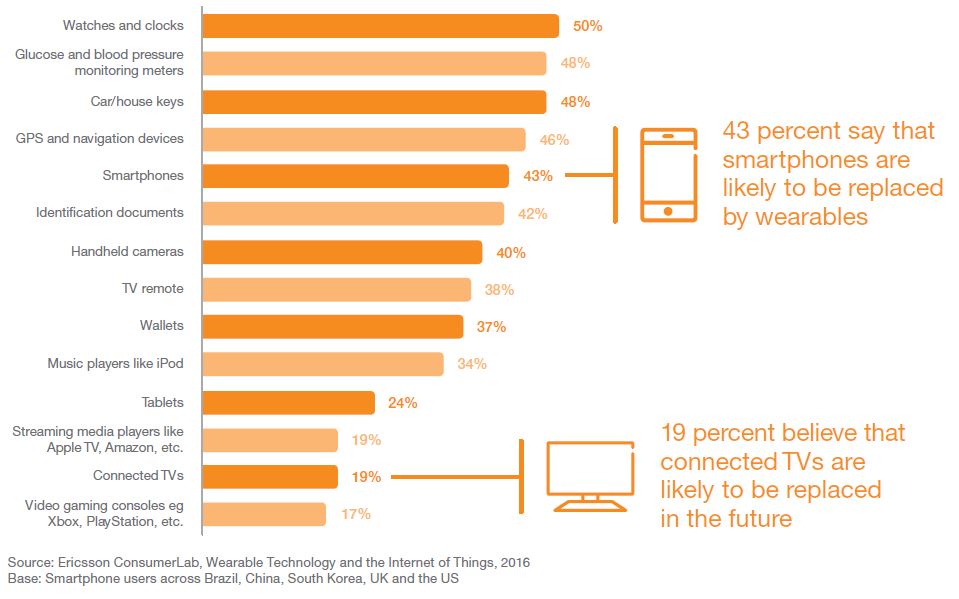 38 percent of smartphone users across all 5 markets also believe that wearables will be used to perform most smartphone functions within only 5 years. Equally, however, many think it will take longer.

74 percent of the smartphone users surveyed believe they will be using wearables to exchange information with other devices and physical things around them. 85 percent of smartphone users think intelligent wearable electronic assistants will be commonplace within 5 years.

As such, based on consumer opinion, wearables will accelerate the convergence of the digital and physical worlds – bringing people into the IoT.

While consumers are confident that technology will help them interact with objects in their surroundings, they also say that this technology may not necessarily be devices, but sensors that could be ingestible or wearable.

60 percent believe that ingestible pills and chips under the skin will be commonly used in the next 5 years – not only to track vital health data, but also to unlock doors, authenticate transactions and identity, and to control objects. 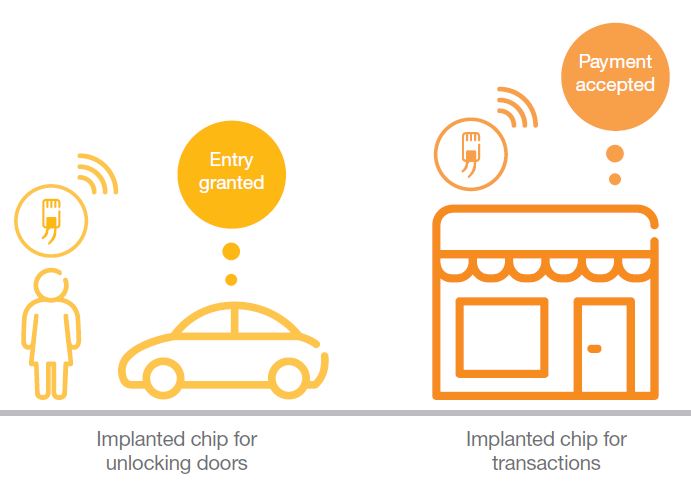 Consumers are confident that wearables can break away from health and fitness as a category, and also from just extending smartphone and tablet experiences. Consumers are not sure that the wearables industry has found the use cases that will drive mass adoption though; and hence they believe the wearable technology inflection point stands well beyond 2020 today.