A temperature sensor is a device which provides temperature measurement through an electrical signal. The most common types are Thermocouple, Resistance Temperature Detector (RTD) and Thermistor. These are some of the most commonly used in the internet of things.

A thermocouple (T/C) is made from two dissimilar metals that generate electrical voltage in direct proportion to changes in temperature.

A T/C is made from two dissimilar metal wires. These wires are joined together at one end to form a measuring (hot) junction. The other end, known as the reference (cold) junction, is connected across an electronic measurement device (controller or digital indicator). A thermocouple will generate a measurement signal not in response to actual temperature, but in response to a difference in temperature between the measuring and reference junctions. A small ambient temperature sensor is built into the electronic measuring device near the point where the reference junction is attached. The ambient temperature is then added to the thermocouple differential temperature by the measuring device in order to determine and display the actual measured temperature.

There are many types of thermocouples, each with its own unique characteristics in terms of temperature range, durability, vibration resistance, chemical resistance, and application compatibility.

An RTD is a variable resistor that will change its electrical resistance in direct proportion to changes in temperature in a precise, repeatable and nearly linear manner.

To greater or lesser degrees, all electrical conducting materials have some amount of resistance to the flow of electricity. When a known electric voltage passes through a conductor, the resistance varies based on the temperature of the conductor. This resistance can be measured and will correspond to a specific temperature. While various elements are affected by temperature in different ways, platinum is commonly used in an RTD due to its purity, linearity and stability over a wide range of temperatures. An electronic readout device, such as a controller or digital indicator designed to measure resistance, is required for use with RTD sensors.

The most common RTD element material is Platinum, as it is a more accurate, reliable, chemically resistant, and stable material, making it less susceptible to environmental contamination and corrosion than the other metals. 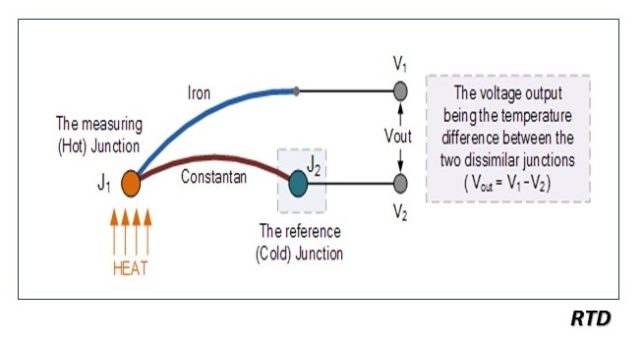 The Thermistor is another type of temperature sensor, whose name is a combination of the words THERM-ally sensitive res-ISTOR. A thermistor is a special type of resistor which changes its physical resistance when exposed to changes in temperature. Thermistors are generally made from ceramic materials such as oxides of nickel, manganese or cobalt coated in glass which makes them easily damaged. Their main advantage is their speed of response to any changes in temperature, accuracy and repeatability. Most types of thermistor’s have a Negative Temperature Coefficient of resistance or (NTC), that is their resistance value goes DOWN with an increase in the temperature, and of course there are some which have a Positive Temperature Coefficient, (PTC), in that their resistance value goes UP with an increase in temperature. 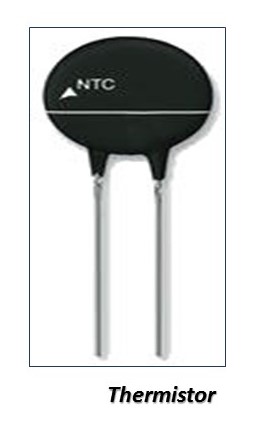 The type of temperature sensor companies are using to build their Internet of Things devices depends on the industry and the objective of the application. For example: the product ‘Wireless Ambient Temperature Sensor’ from the UK company ‘Wireless Things’ uses the thermistor sensor for this product. It is a wireless temperature sensor that measures and sends periodic readings of the ambient temperature (+/- 1 degree) of its environment. This device is no more complex to use than sending a text message, and, it is completely secure as it uses 128 bit AES encryption.