One of the main challenges companies are facing developing Internet of Things (IoT) solutions is the development / use / standardization of IoT protocol layers. Recent developments in connectivity technologies have spurred the adoption of internet connected “smart” devices for remote sensing, acting in particular way and intelligent monitoring using advanced analytics and real-time data processing. As the pace and the scale of such solutions increase rapidly, there will soon be a problem of getting these disparate solutions to work seamlessly together to realize a large scale Internet of Things. In the near term, disparate islands of solutions are likely to outpace deployment of interoperable standards-based solutions.

There is an ongoing trend in integrating the Machine-to-Machine (M2M) and Wireless Sensor Networks (WSN) solutions with other established Internet services using existing Internet Protocols. This has resulted in bringing the standard IP-centric protocols into the realm of smart devices and smart objects. 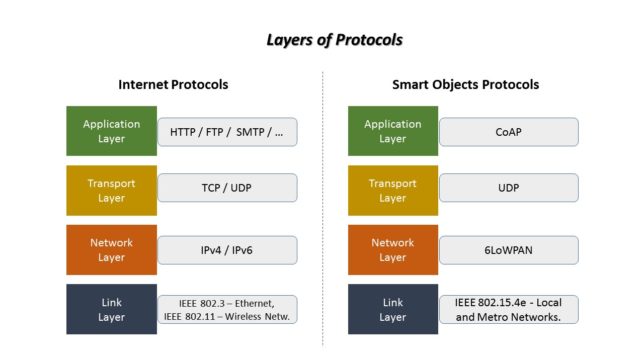 The File Transfer Protocol is a standard network protocol used to transfer computer files between a client and server on a computer network.

The Transmission Control Protocol provides reliable, ordered, and error-checked delivery of a stream of octets (unit of digital information in computing and telecommunications that consists of eight bits) between applications running on hosts communicating over an IP network.

The User Datagram Protocol is a transport layer protocol defined for use with the IP network layer protocol. It is often used in applications specially tuned for real-time performance.

The Internet Protocol Version X provides an identification and location system for computers on networks and routes traffic across the Internet. IPv4 uses 32-bit (four-byte) addresses, which limits the address space to 4,294,967,296 (232) addresses. IPv6 uses a 128-bit address, theoretically allowing 2128, or approximately 3.4×1038 addresses.

It is a standard specification for Ethernet, a method of physical communication in a local area network (LAN).

Constrained Application Protocol is an application layer protocol that is intended for use in resource-constrained internet devices, such as WSN nodes. It is designed to easily translate to HTTP for simplified integration with the web, while also meeting specialized requirements such as multicast support, very low overhead, and simplicity.

The IPv6 over Low power Wireless Personal Area Networks is concept originated from the idea that “the Internet Protocol could and should be applied even to the smallest devices,” and that low-power devices with limited processing capabilities should be able to participate in the Internet of Things.

IEEE 802.15.4e – Local and Metropolitan Area Networks
It is a standard which specifies the physical layer and media access control for low-rate wireless personal area networks. It is the basis for the ZigBee, ISA100.11a, WirelessHART, MiWI, and Thread specifications.

Two of the biggest challenges that IoT implementations are faced with are the presence of low-powered devices (which need to function for months or years without getting any power recharge) and the frequent data exchanges over a lost information network. These unique characteristics and challenges makes the as-is use of the existing internet protocols to be less than ideal and sub-optimal.

As we move from the Internet layers to the IoT specific layers protocols we are suddenly confronted with an acronym soup of protocols- from the wireless protocols like ZigBee, RFID, Bluetooth and BACnet to next generation protocol standards such as 802.15.4e, 6LoWPAN, RPL, CoAP etc. which attempt to unify the wireless sensor networks and the established internet.

Ongoing standardization efforts towards harmonizing internet protocols for wireless sensor networks-based internet of things have raised hopes of global interoperable solutions at the transport layer and below. With that being addressed, the next requirement is to address interoperability at the application layer.

Smart objects, low-powered devices and WSNs are trying to grow beyond narrower domains/fields of deployments wanting to be connected to the cloud/internet, but, suffer from constraints and scalability limiters. Then, there is the world-wide Internet, very successful for choices on de-facto standard technologies (like HTTP, SMTP, SSH, etc.), but, never had to bother about severe power/data loss constraints.

Innovation for this can happen in several directions:

– The resource constraints may get eased through advances in device computation / networking technologies such as low powered microcontrollers, longer lasting batteries and alternate power sources, cheaper storage and bandwidth, etc.

– Standardization bodies and alliances are working on defining newer protocols which are optimized for     specific use cases / underlying deployment scenarios. Adoption of these protocols and standards involves collaboration among government standards institutes like ETSI, organizations like IETF / IAB and alliances like ZigBee, Dash 7, etc.

– There will be a (perhaps prolonged) period of mixed deployments bridging islands of highly domain specialized / optimized WSNs with the rest of the internet through gateways, middleware, etc.

WSN researchers had agreed upon the idea that  – the Internet Protocol could and should be applied to even the smallest of devices (smart devices) -.