The meaning of the acronym V2X is Vehicle to Everything. V2X in the car industry refers to different technology areas in the world of the Internet of Things Automotive. At this point, these different areas are: 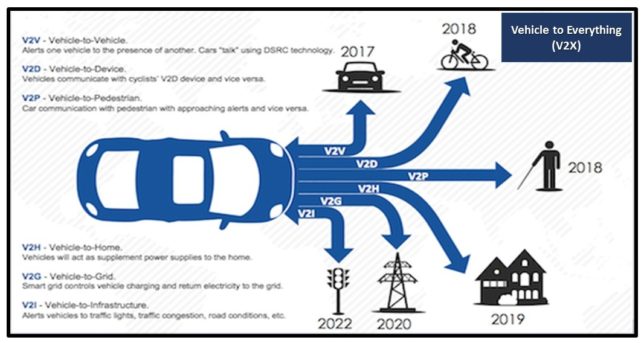 The advantages of V2X are extensive, alerting drivers to road hazards, the approach of emergency vehicles, pedestrians or cyclists, changing lights, traffic jams and more. In fact, the advantages extend even beyond the freeways and into residential streets where it technology helps improve power consumption and safety.

Getting proficient in understanding V2X is valuable in tracking future vehicle features that will link cars to the world around them and make driving safer in the process.

Why V2X is necessary?

Safety and congestion are the two biggest problems on our roads today. According to the National Highway Traffic Safety Administration (NHTSA), more than 32,000 people died on U.S. roadways last year.

NHTSA estimates traffic crashes cost the economy $299.5 billion per year. And, Americans waste about 3 billion gallons of fuel each year stuck in traffic – which amounts to billions upon billions of dollars and a not–so-green impact on the environment.

How does V2X works?

V2X technology is based on 5.9GHz Dedicated Short Range Communication, a derivative of Wi-Fi specifically defined for fast moving objects. It allows vehicles to communicate their state, such as their position and speed, to surrounding vehicles and infrastructures even in non-line-of-sight condition, such as behind a building or a curve.

V2X communication is based on WLAN technology and works directly between vehicles or the infrastructure, which form a vehicular ad-hoc network, as two V2X senders come within each other’s range. Hence it does not require any infrastructure for vehicles to communicate, which is key to assure safety in remote or little developed areas.

The data volume of these messages is very low. The radio technology is standardized as part of the WLAN IEEE 802.11 family of standards and known in the US as WAVE (Wireless Access in Vehicular Environments) and in Europe as ITS-G5. 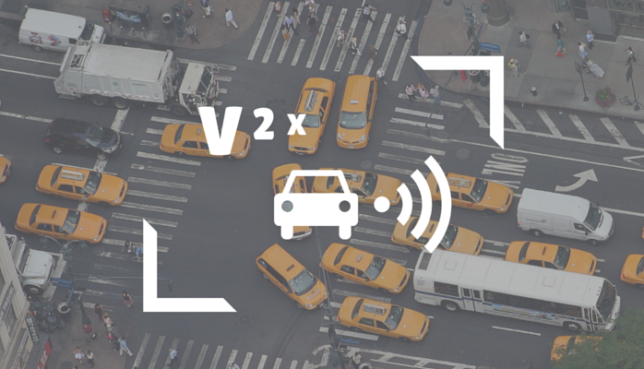 It is still a relatively promising market, and many of the system’s benefits will not be fully realized until the market expands. From an economic standpoint, the market potential for V2X technology is huge. While the industry has barely been tapped in 2016, production is expected to rise exponentially in coming years.

It is expected to grow significantly over the next twenty years, as many top V2X suppliers, such as Delphi, Denso and Continental, have already announced their V2X integration plans.

What is the reality of V2X?

In order for a vehicle to communicate with another vehicle or roadside object, the object must also use V2X technology. Many traffic systems don’t currently have it systems in place, which means that vehicles that do have the technology cannot communicate with them.

As V2X systems become more pervasive, vehicles are expected to be able to communicate not only with traffic systems, but also with cyclists and even pedestrians. Many new car models use some form of V2X technology, particularly the more expensive or luxury brands, but it use is expected to eventually be added to lower-priced vehicles, too.

Automotive industry is in continuous evolution, making the car safer, greener and more enjoyable to drive.

V2X technology will be particularly prominent in autonomous vehicles, which already scan the immediate environment for risks and act upon their data. It will give these systems a further reach and more information to allow them to make more informed decisions.