The time it takes for a packet of data to travel from the sensor node through the network to the gateway node, or visa-versa. Generally speaking, latency reflects the speed of the network: the faster the network, the lower the latency.

The amount of data that can pass through network per second (or other time segment). Relatively high throughput is required for audio or video streaming.

The degree to which a wireless network, if interrupted, will recover or reconfigure, and deliver a packet of data to its destination.

The number of nodes that can be included in a single network.

The range of the network is the overall distance a complete network can span. The range of a node is the maximum distance of one hop, from one node to the other. 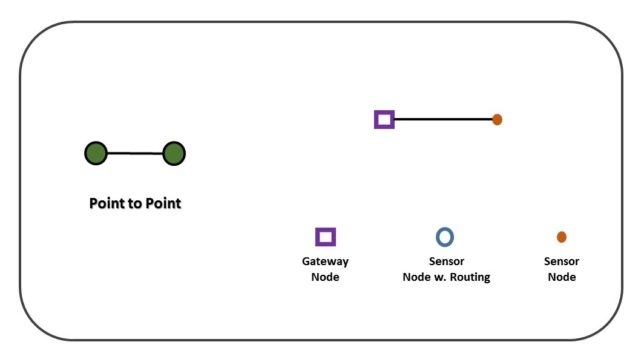 A point-to-point network establishes a direct connection between two network nodes. Communication can take place only between these two nodes, or devices. An example of this type of network is a Bluetooth link between a cell phone and an ear piece.

The advantages of point-to-point networking are its simplicity and low cost. The primary limitations spring from the one-to-one relationship that exists between two devices; the network cannot scale beyond these two nodes. The range of the network is therefore limited to one hop, and defined by the transmission range of a single device. One side is generally a gateway to the Internet or another conventional network that allows users to make use of the device. 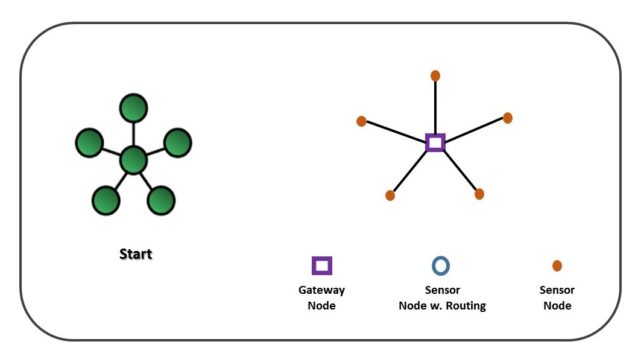 A star network consists of one central hub (a.k.a. gateway node), to which all other nodes (e.g., the sensor nodes) in the network are linked. This central hub acts as a common connection point for all other nodes in the network. All peripheral nodes may thus communicate with all others by transmitting to, and receiving from, the central hub only. An example of this topology is the WiFi network hub in your house. The hub is generally also the link to the outside world.

There are a few important advantages to a star topology. First, the performance of the network is consistent, predictable and fast (low latency and high throughput). In a star network, unlike the mesh network described next, a data packet typically only travels one hop to reach its destination (if traveling between the hub and a sensor) or at most two hops (if traveling between two sensors), yielding a very low and predicable network latency.

Second, there is high overall network reliability due to the ease with which faults and devices can be isolated. Each device utilizes its own, single link to the hub. This makes the isolation of individual devices straightforward and makes it easy to detect faults and to remove failing network components.

The disadvantages of this network type are similar to the point-to-point network. The range is limited to the transmission range of a single device. Additionally, there is no ability to route around RF obstacles should there be a network interference or interruption. Finally, in a star networking there is a single point of failure, the gateway. In a mesh network, if the gateway loses connectivity, the network is cut off from the world but it can still exchange and store data internally. This is important to some applications, such as meter reading or cold chain management. 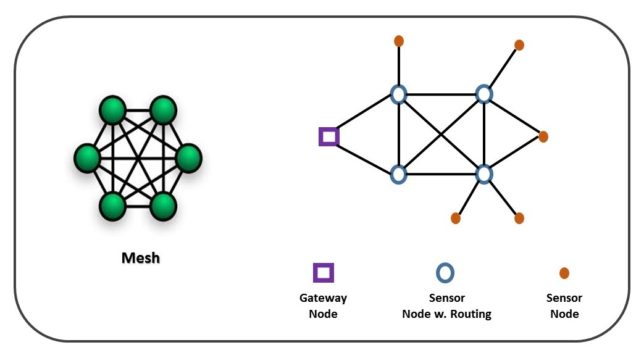 A mesh network consists of three types of nodes:

• A gateway node as in a star network, provided so data can reach the outside world.

Sensor/router nodes must not only capture and disseminate their own data, but also serve as relays for other nodes. These nodes collaborate with neighboring nodes to propagate the data through the network.

Mesh network nodes are deployed such that every node is within transmission range of at least one other sensor/router node. Data packets pass through multiple sensor/routers nodes to reach the gateway node.

This networking topology is used for many applications requiring a long range and broad area coverage. Applications include building automation, energy management, industrial automation, and asset management, etc. Because the network range is not limited to the transmission range of a single device, the network range can be very broad, covering large areas, such as a building or campus.

Mesh networks can scale up to thousands of nodes, providing a high density of coverage with a broad assortment of sensors and actuating devices. The flexibility of network layout allows coverage in environments facing high radio frequency (RF) challenges, such as high RF interference or RF obstacles.

The primary disadvantage is that mesh networks are more complex than point-to-point or star network topologies.

The volume of data created by the IoT will have significant impact on the networking systems used today. Deep analytics will require distributed datacenters and real-time response to events. Fast, agile networks are crucial to enable the real-time analysis of sensor data.